You have been assigned to undertake 10 consecutive trips over dangerous waters. You have a record of recent random encounters along your route, a list of interventions you may perform to improve your odds of success, and 100 gold pieces (which are, critically, not nearly enough to perform all interventions). Spend wisely, and good luck.

There are 21795 trips on record, with four entries per record:

Damages being represented as strings will probably confuse automatic sorting routines, which would make plots annoying. “southbound” and “northbound” are pointlessly verbose. “unknown” for missing data… is less annoying that the standard missing value symbol, which is treated specially by most pandas algorithms. “month of departure” is actually a month and year, which need to be split apart.

Applying all of the above, and renaming the columns for brevity, we get the following:

We have to spend 10 months aboard the Grey Swan, from month 5, 1406 to month 3, 1407. This means that we will never travel on months 3 or 4 of the year. Are there any seasonal encounters we should be aware of? 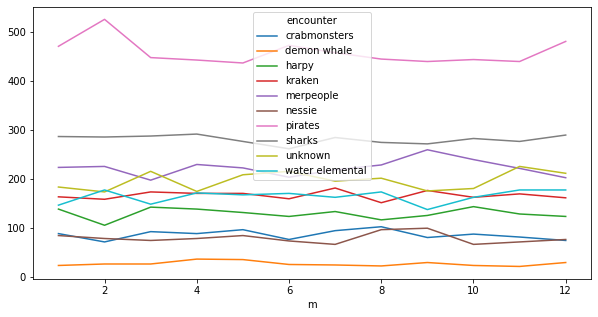 Not that I can spot at a glance.

We have to make 5 northbound trips and 5 southbound trips, so this shouldn’t matter, but I’m curious and it is easy to check: 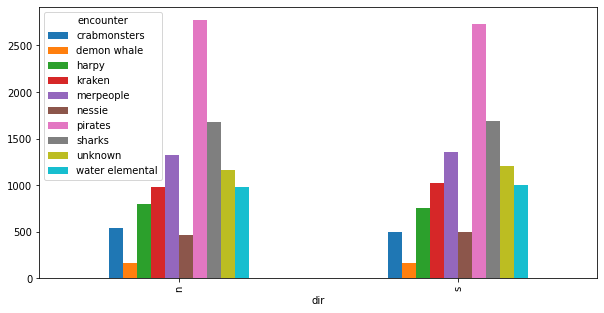 We are looking at decade of data. It seems plausible that some trend has broken over such a long period. 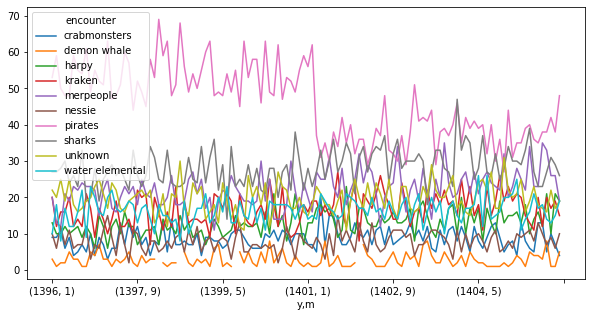 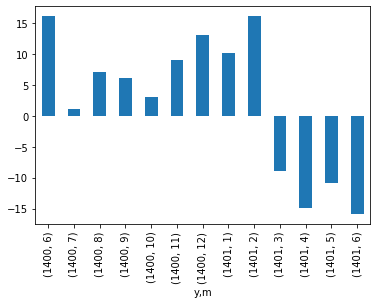 Looks like the drop happened between months 2 and 3, 1401. Since we know that every ship that travels these waters gets attacked by something, a drop in pirate attacks means an increase in other types of attacks. 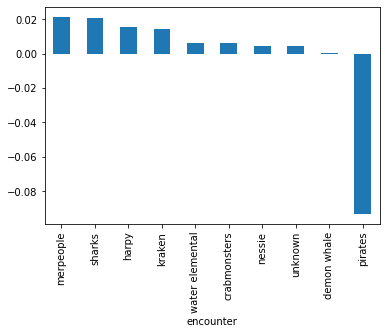 Merpeople, sharks, harpies, and kraken are the biggest winners. Pirates are the only ones whose share went down.

We can’t see encounter lethality per-se (dead men tell no tales, so we don’t know which encounters resulted in fatalities), but we can make some inferences given the damage distribution for each encounter type. In particular, encounters without long tails are likely 0% lethal, or easy to make 0% lethal.

Looking at these histograms, I can make the following guesses for distribution shapes:

It is possible, if implausible, that harpy damage has two humps rather than one, and we just can’t see it because the second hump is composed entirely of sunken ships. We have no reason to reach into this weird bucket of possible worlds, because we have obvious suspects for the sunken ships.

Dangers of the pirate life

Damage from pirates has two humps, which suggests two populations. We also know that pirates became far less common between months 2 and 3, 1401. Hm.

Indeed, pirates after march 1401 are not just rarer, they are much less destructive. I imagine the Navy finally had enough of pirates, and hit the nastier gang, hard.

I’m confident that water elementals don’t sink ships, so modelling them doesn’t provide much value. That said, they looked about uniform, so I suspect I can easily figure out the exact damage mechanism. 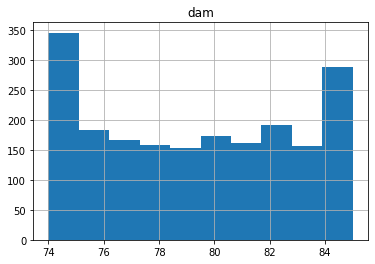 74 to 85 means twelve possibilities. 73+d12 damage? The way to go about checking whether this is true would be to model possible outcomes with a multinomial distribution, and doing a statistical test to calculate a degree of fit. But that is a lot of work for an entirely tangential point. What I did was to model each value as an independent “bucket”.

We can ask how likely it is that there will be no more than x encounters resulting in 74 damage by evaluating the cumulative distribution function, or cdf, of \(\text{Binomial}(n=1979, p=1/12)\). Conversely, we can fix our confidence at 95% and ask “up to how many encounters could there be, resulting in 74 damage, if I start with 1979 encounters?” by evaluating the inverse cumulative distribution function. The scypi module provides the percent point function for the Binomial distribution, which is the inverse cdf, but with a fancier name. q is the confidence level, expressed as a number in the (0, 1) range.

This is all slightly wrong: if we are “unlucky”, and there are lots of encounters that rolled 85 damage, that increases our chances of seeing surprisingly few encounters on the other damage brackets. Modelling with the multinomial distribution would have fixed that, but hopefully this is close enough.

There are 12 damage values, and each one has a 1/10 chance of having between 145 and 185 encounters in it, so we naively expect 1.2 of them to be out of range, and a bit more if we take into account that their results are linked together.

We got 4 out of the 12 falling out of range, which is… more than I expected. On the balance, this is likely still normal (not like I have a better hypothesis going for me), but I wouldn’t bet money.

Crab monsters have this continuously-descending damage pattern that makes me think geometric distribution. 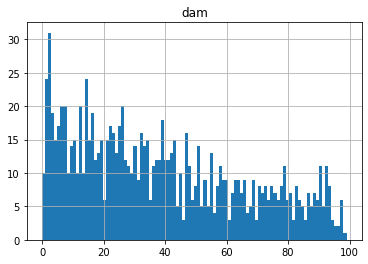 Mean damage is about 38, and we suspect some attacks, the ones with the highest damage, are not being reported. We can easily create a simulated dataset of 1000 encounters, with a 1/40 chance of shaking off the crab, and look at the resulting distribution. 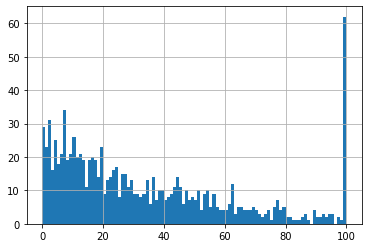 This seems plausible, if you mentally delete the huge spike at 100 and adjust the height of the bars, but the 1/40 value is suspect. Geometric distrubutions have long tails that make the precise value of p fairly hard to pin down.

And about those long tails: the distribution of crab monster damage seems to very roughly follow a line, but geometric distributions are not lines, they are curves. The lower the chance of stopping at each step of the process, the harder it is to spot the curvature. Here’s a simulation run with p=1/10, notice the obvious tail: 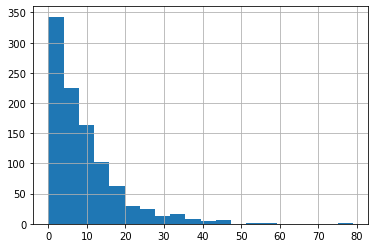 By far the most useful artifact my analysis produced is the plot of damage distribution per encounter. Let’s see it again:

From the above, we can formulate two plans:

The merpeople are too expensive to pay off. They may sink us, but the chance of facing them is low, and they damage way more ships than they sink. Instead we get armed carpenters, 20 more oars, 3 more cannons, and foam swords, for 85gp, leaving us with 15gp left over.

If we are really intent on surviving no matter what, we can grease the scaly cogs of underwater bureaucracy and get ourselves a free pass from the merpeople. This does mean we are really strapped for cash. Foam swords need to go, and we still don’t have enough. Running from the demon whales is the biggest impact intervention we can make. Arming the carpenters is probably second best. Nessie seems to do only just enough damage to sink ships; one cannon may be enough to drop his lethality to 0%.

We bribe the merpeple, and get armed carpenters, 20 more oars, and 1 more cannon, for 95gp, leaving us with 5pg left over.

I am currently on the look for a new job! If you have enjoyed my work and think I would be a good fit for your company, send me an email. I currently live in Argentina, but I’m searching for relocation options; out-of-country offers are more enticing than local offers. If you don’t see an update immediately below, I’m still available.