This is the first part I'm doing with a "proper" toolchain. Relearning Jupyter, Pandas, and Matplotlib at once is going to be difficult enough without throwing machine-learning algorithms into the mix. Consequently, I'm going to import linear regression and r-square from scikit-learn, but that's it.

I'm making the spreadsheet for the last problem, plus the data and notebooks for this one, available through my GitHub account.

You are hired to obtain magic items for a sorcerer. You have 200 gold pieces (gp) and access to the local magic shop. The sorcerer demands that the items, when sacificed for their power, yield enough mana to complete his spell. You don't know how much mana is contained on each item, but you have access to the sorcerer's meticulous records. If the mana supplied is insufficient you will owe the sorcerer his 200gp back, otherwise you can keep what you don't spend.

We have two sources of data: the sacrifice data provided by Wakalix the Wizard, and the store list collected by us. I did some cleaning, reshaping, and renaming, and then saved everything to a new file.

There are four columns to the sacrifice data: "Item name", "Glow color", "Thaumometer reading", and "Mana gained from sacrifice".

The item names seem to conform to the format "Item of Enchantment +d" (eg: "Warhammer of Rage +1"). There are some items that don't seem to have any modifier.

We can check if we have accounted for everything by using a regular expression.

A regular expression is a string that describes a different string. In the above "\w+" means some (at least one) word-character (letters, numbers, dashes, and underscores, I believe). Because "+" is used to indicate repetition, when we talk about actual plus signs we need to escape them; so "( +\d)?" stands for "optionally, a space, a plus sign, and a digit".

All of the items follow the pattern, so we can split the name into its components. The modifiers range from 1 to 8, so I took all of the missing modifiers and treated them as "+0".

The item names in the store data follow the same pattern (I checked by hand this time around, they are very few). I split and cleaned them with the same code.

The color field had the colors capitalized, so I had to lowercase them to match the sacrifice data.

Obviously there was no mana field, since guessing that is the whole point of the exercise.

No matter how much analysis we do, we cannot know how much mana each item will give. There is a real risk of overthinking things when doing these analyses. We want to make a profit from the transaction; instead of analyzing forever, we should pay attention to whether we have enough information to do that. I'm going to be doing a best effort guess as soon as possible, and refine it as we go along.

There is also the issue of "what even is success?".

Let's start with the obvious: mean item mana is 20.5. If we assume that price and mana are uncorrelated, picking the six cheapest items yields 123 expected mana for 194 gp, which is just under budget.

I did not calculate the probability of ruin (I'm lazy) but it can be done by repeatedly picking six random items from Wakalix's list, and checking whether they add up to 120 mana or not.

Let's bring in the Thaumometer into account. A linear regression from thmm to mana yields an intercept of 13.6, slope of 0.25, and r-squared of 0.10. A couple of things are obvious from that:

Picking the six items with the best mana/gp yields 141 expected mana for 197 gp. Again, I didn't calculate the expected value of the deal, but with 21 points of mana cushion, I'd say we'd pass. However, we would make no money.

Let's take a closer look at the thmm-mana response. A thaumometer-mana scatterplot would have a lot of repeated or tightly-clustered readings, distorting our perception of hot spots. We'll use a a hexbin plot. Hexbin plots split the plane into areas and show us how many readings fell on each area. It's like histograms, but for 2D data.

Why hexagons? I found a paper about it1, but even after reading it I don't have much of a reason. 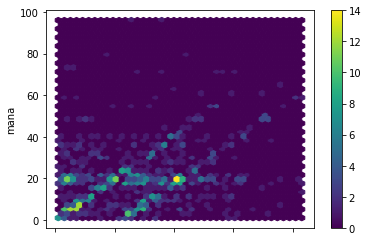 Ok, that is interesting:

This suggest the following:

Turns out that drawing a separate hexbin plot per color is pretty easy:

x and y are what you'd expect, gridsize tells us how many hexagons per side there are (in this case, there are 40x40=1600 bins), and cmap defines a color map, ie a mapping from numbers to a palette of colors. "viridis" is the name of a palette that comes built-in with Matplotlib, which Pandas uses to do the graphs. 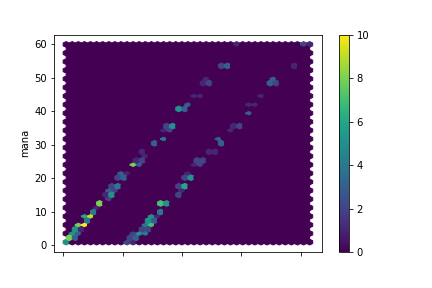 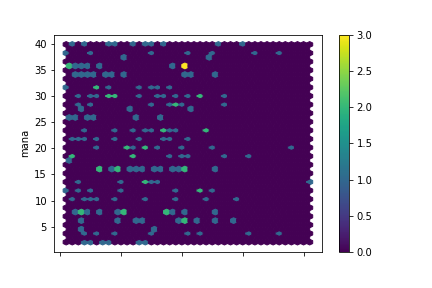 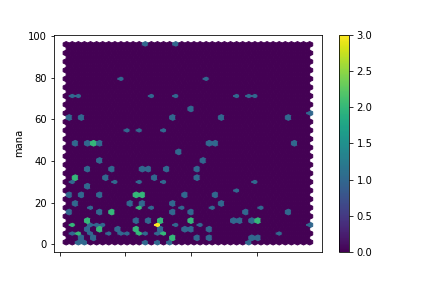 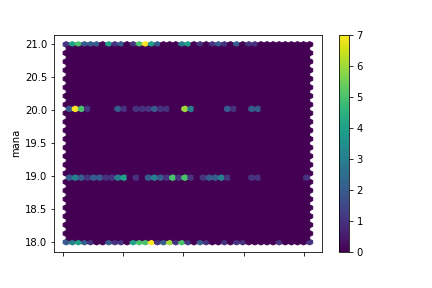 Wonderful, I could not have hoped for cleaner data:

Let's incorporate all we know so far into a prediction function:

Picking the four items with the best mana/gp yields 119.9 expected mana, for 139 gp. Not bad! But I smell weakness. We can figure out where that double-line comes from.

Let's calculate the error for each blue item and see if items, enchants, or modifiers tell us anything:

First try! Almost no error anywhere, but consistent errors in three categories: Amulets, Pendants, and Rings. The Thaumometer has a thing for jewelry! Let's adjust for that and see if there is any residue. 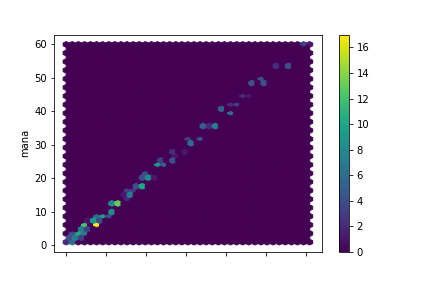 Applying the predictor to the entire dataset, we obtain an r-squared of 0.42.

Picking the four items with the best mana/gp yields an expected 136.5 mana for 142 gp.

At this point we can stop with a nice guaranteed income. Picking among blues and yellows only (remember, we got these down to 1 or 2 mana points of error) we get 129 mana for 145 gp. But I was curious to see if we could squeeze out anything more, so I decided to take a little look at the reds and greens, which so far had eluded me.

I plotted histograms for every red item, broken by item type. 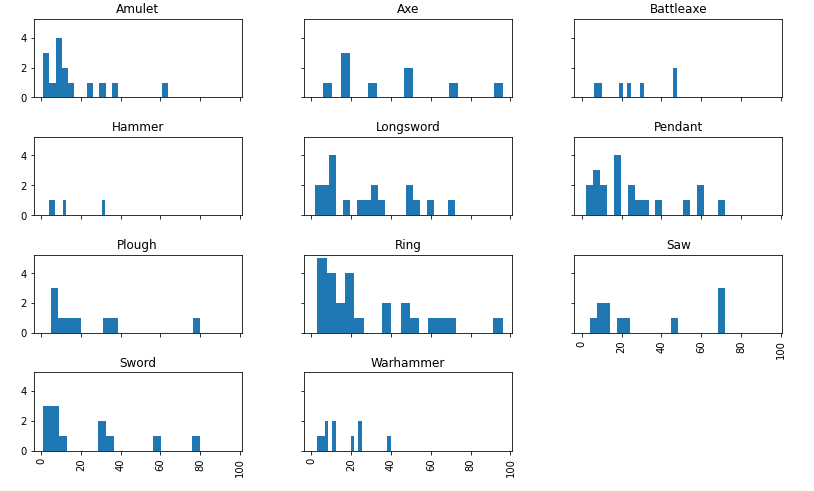 Since that didn't look like anything to me, I did the same for enchantment, then by modifier. Then I repeated everything with the green items.

At last, when I was about to give up, I spotted a pattern: 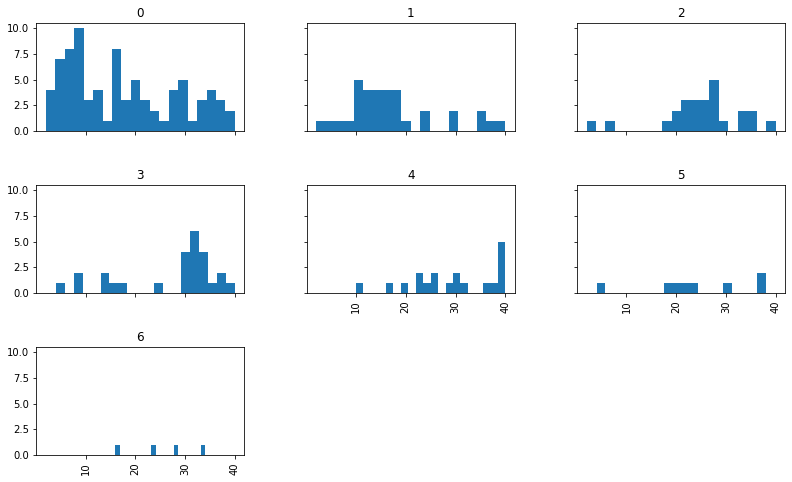 If we split the green items into low-modifier (+0/+1) and high-modifier groups, we can see the jump. 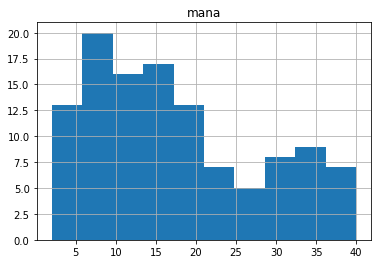 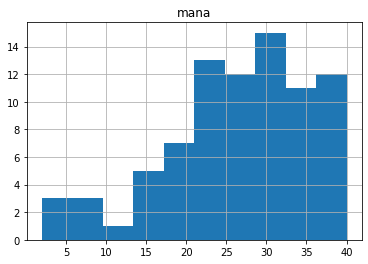 I didn't originally notice a modifier-mana relation in the red items, but now I have a reason to look again: 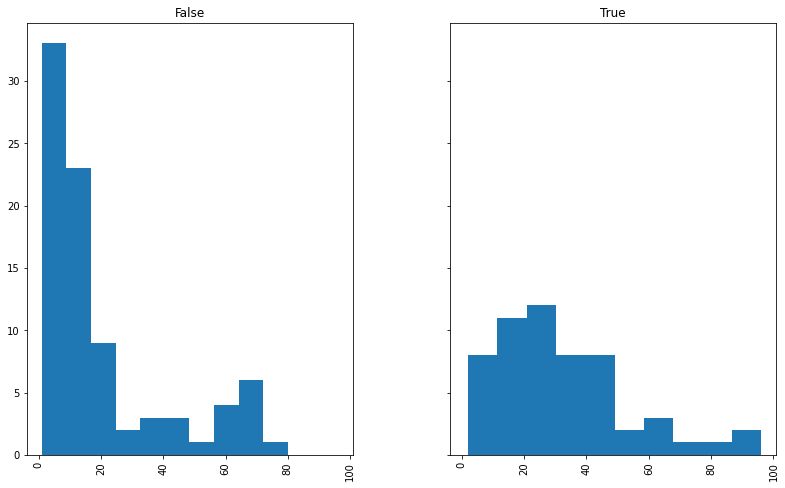 We can now construct and run our final predictor:

r-squared of 0.47. A modest but welcome improvement. How does this affect our available options?

Picking the four items with the best mana/gp yields 143 mana for 143 gp. The numbers aren't much different, but the additional information has changed our item selection. Now we have two blue item and two greens. The blues account for \(90 \pm 2\) mana. To make it to 120, we need another 30 mana from two green items (modifiers +2 and +4).

What are the odds? Well, we can do what I should have done at the begining: random resampling. Why resampling? In short: because we don't want to get tripped up by how the population is distributed.

We know that, among high-modifier green items, the mean item yields 26.8 mana when sacrificed. If all items yielded exactly that, we'd have no variation, and therefore no risk. If one in ten items yielded 268 mana while the others yielded 0, we would have a 19% chance of having way too much mana, and a 81% chance of nothing, but we'd still see the same 26.8 mean mana figure.

When you have a lot of items, each one independently contributing a small percentage of the expected total, the Central Limit Theorem tells you the sum is going to be normal (bell-shaped), even if the individual contributions are not normal. It even tells you the correct standard deviation. We have two items. There is some debate over how many is "a lot", but in this case we can confidently say we don't have "a lot" of items. So we can't rely on the Central Limit Theorem to calculate our chances.

Resampling has limits, mind you. There is nothing stopping you from resampling ten thousand times and coming up with a very confident estimate of your odds… from six samples. We have 82 items in the "green, high-modifier" category. That yields 82*82 = 6724 pairs (if we allow sampling the same item more than once). Sampling about 1000 pairs seems about right.

Laplace's Law of Succession tells us to pretend we have seen an extra hit and miss when calculating our totals. To make the denominator a nice round number, I'll use 998 samples.